Leonard:  A Cape Crustacean with a Cause

Linked Thru Leonard:  a movement for world peace 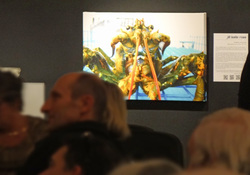 "Making Waves" exhibit Cotuit Center for the Arts
I met Leonard at a lobster mart in Dennisport, Ma (that's on Cape Cod).  I picked him up from the pool, set him on the grate, took his picture (he posed so nicely, didn't he?), put him back in the water, and left.

Not long after, the Arts Foundation annouced the theme for that year's Winter Show:  Making Waves.  I had to send Leonard in.  It just seemed right!

A few months later, there we were - Leonard and I.  It was my first juried show.  He looked so handsome hanging around the gallery during that month.  And we enjoyed reading, and responding to, the letters a class of 4th graders wrote.  They had some great questions!

​After the show, I wasn't exactly sure what I was going to do with a 20"x30" canvas print of Leonard.

I was feeling a bit guilty about having left Leonard on death row. He had posed so nicely.  He had given me a new experience - participation in a juried show, name tag that said "artist" and all!

I decided I needed to try to immortalize Leonard.  He deserved it!  I tried a few things, but nothing was making the kind of progress I envisioned.  AND, I was starting to feel as though immortalizing Leonard was a sort of narrow, Leonard-centric goal. I needed something a bit more robust.  Like...WORLD PEACE!  Yes, that was it.

THE STRATEGY:  LINKING PEOPLE all over the world through LEONARD
​ 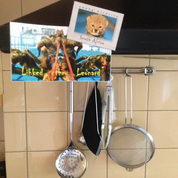 Holland
So what if...
everyone had a photo of LEONARD and they
Wouldn't we start to feel a little more connected to one another?

After all, we'd have a mutual friend (LEONARD), and we'd be having a shared experience (talking to LEONARD).

​And if we all felt a little more connected to one another, isn't it possible world peace would follow naturally?

We (LEONARD and I) think so.
It seems worth a try!  No worse than many ideas out there, and much less dangerous!
So that's how it started.  That's how LEONARD, while minding his own business in a lobster mart in Dennisport, MA, became a CRUSTACEAN with a CAUSE.

All proceeds from LEONARD SALES help support the project and are currently being 'earmarked' for PHASE II!