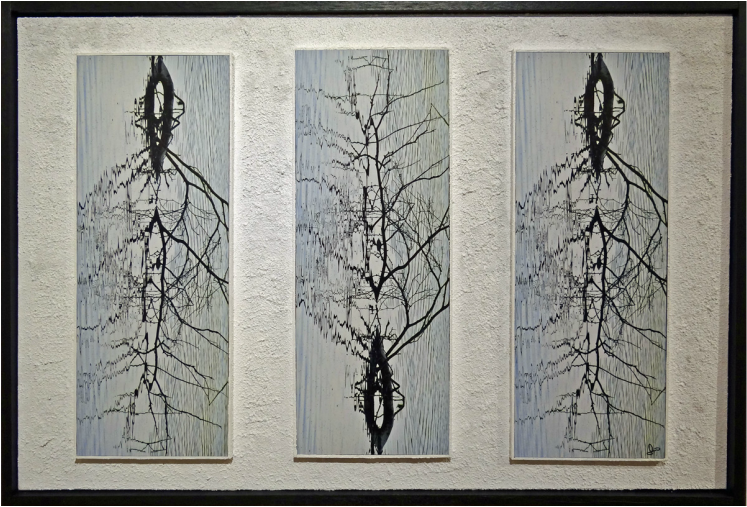 This piece was created for, and submitted and accepted to, the Winter 2015 "Opposites Attract" exhibit
sponsored by the Arts Foundation of Cape Cod and hosted by the Cotuit Center for the Arts.
Below is the text that accompanied the submission

The piece as illustration of “Opposites Attract”, or rather “Opposite” Detracts

The original photo was taken on Santuit Pond in Mashpee. It was a cold fall day.  I stepped out on a dock and saw a long dead branch stretched out in the water—partly submerged, partly peering over the waterline; its own reflection rising up to meet it.

I’m intrigued by reflections – by what they show us about the thing itself, and the way they remind us that position and perspective change can change even an seemingly stable object.  My KaleyedesCapes, have been a way I've played with reflections of sorts - turning simple Cape Cod images on their heads and other ways, repeating and reorienting them, and using them as building blocks to create new pieces –pieces fundamentally about stability and change, individual and interconnectedness, the little picture and the big.

It’s tempting to think of reflections as “opposites” – opposite orientations.  But in general, I resist thinking in terms of “opposites.”  The very idea limits rather than expands our thinking, simplifies that which is in fact beautifully complex.  Day and night, men and women – to think of the first as the opposite of the second belies what the two have in common, and fails to encourage us to explore the ways in which they are different.  Although there are instances when it seems “Opposites Attract,” sometimes, the truth is, “opposite” detracts.

This piece is in memory and honor of an old friend, Andrea Knight.  She was a photographer who worked often with images and their reflections in the waters of the Adirondack Mountains.  Recently, she lost her battle with ALS.

This original piece is currently available for sale.
Print versions of the piece are available in a variety of sizes.  View print version.
See more of the "Opposites Attract" exhibit on facebook.